Posted on 3 March 2015 by Sebastian Gurciullo

20000 days on earth is a film portrait of singer-songwriter Nick Cave by British artists Iain Forsyth and Jane Pollard. Cave himself contributed to the writing of the film’s script which means it is also a partial self-portrait. Scenes intercut between the production of Cave’s most recent recording sessions under the Bad Seeds band name for the album Push the Sky Away, to episodes of his life in Brighton, imagined(?) conversations with Kylie Minogue and others while driving his car, psychoanalytic sessions exploring his past and so on. 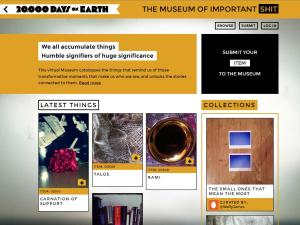 Homepage of the Museum of Important Shit

About half-way through the film Cave announces that he’s going to ‘the archive’, his archive that is, which though unstated is presumably located in Brighton, England, where he currently lives. This is poetic license because although there really is a Nick Cave collection, it is located at the Performing Arts Collection in Melbourne, Australia. This treatment of Cave’s collection is emblematic of the whole approach of the film, which plays on the boundary between fact and fiction and the creative process that transmutes the former into the latter.

Cave’s archive functions in the film as a source of reminiscences about origins and inspirations, events lived and imagined, an opportunity to meditate on life and the creative process via the by-products of both. Much of the last half of the film is interwoven with these archival musings.

Even though the film is about Cave, who is predominately a writer and performer of songs in the rock genre, the insights take on a more general relevance. The function of Cave’s archive in his life could just as easily be experienced by others who are not themselves actively engaged in the creative arts. The act of keeping and revisiting bits of the past is actually a very common story, a way of shaping one’s identity and life. This is where a side project by the makers of the film can be seen as an attempt to generalise the self-interpretation that Cave has undertaken. The online Museum of Important Shit, invites anyone to register and share their own significant bits of the past, things that have special meaning for them.

The material evidence collected by Nick Cave, but also encouraged by the Museum of Important Shit, is an example of ‘evidence of me’ in the sense proposed by Sue McKemmish. It is also the raw material for the work of the self, the process of self-creation where life becomes like a work of art, a performance of perpetual reinvention, as was theorised for example in the later writings of Michel Foucault.